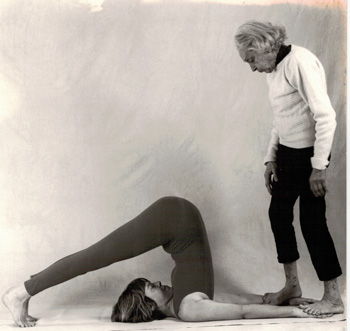 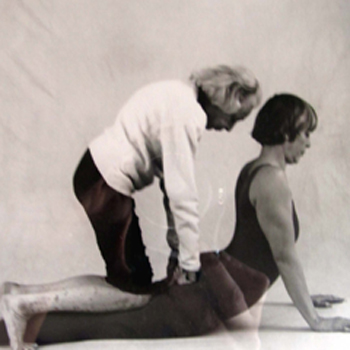 When I met Vanda, I had been practicing yoga for many years in Florence, Italy.

Encountering her and being accepted as a private student, slowly led me into a completely new, revolutionary and intense world of Yoga.

Pushing and straining were banished.

My body was invited to use the force of gravity to free the spine.

This was combined with the discovery of breath which, when listened to, revealed a new kind of wave-like movement and unveiled the body’s ability to teach.

I was an ignorant pioneer, attempting to follow Vanda, a trail blazer, who had discovered and charted unexplored territory.

This involved a long transitional period, a process of “undoing” as Vanda would say. In the fifteen years that followed, it took her infinite patience, perseverance and unending love, to communicate, with very few words, this challenging world where she said there must be “no doubts”.

She changed my life. I think the few students she taught, who are all well-known teachers and my friends, would say the same thing.

I began my formal studies with the Light of Yoga Society for two years and then continued with Dona Holleman for ten years. This chapter of my study of Yoga concluded and culminated in a month’s stay in Pune, India at the Ramamani Iyengar Memorial Institute.

The next chapter began and continues to this day with what Vanda taught me. When Vanda began to teach me, she was over 75.

Can you imagine her generosity in privately teaching each one of her students for hours at a time? She was direct, forceful, and serious, always pin-pointing the exact spot that needed attention.

I was directed through her hands, by touching her body, and then by imitating her, slowly getting to the root of each position. It took years to understand the essence of wave, breath, and gravity, “our three friends”, as she called them”

This website uses cookies to ensure a better browsing experience. By continuing to browse this site, you automatically consent to the use of cookies.OkRead more